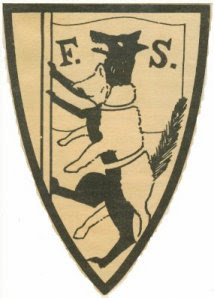 Beware of false prophets, which come to you in sheep’s clothing, but inwardly they are ravening wolves. Ye shall know them by their fruits.

It's quite staggering how blatant the Fabian symbol of the wolf in sheep's clothing is. The classic symbol of deceit and treachery is openly embraced and flaunted.

It's also amazing how little publicity the Fabian's get. We are often told how the (state controlled) BNP is a danger to the country but any imagined threat they possess is dwarfed by the very real menace of the Fabians.

Named after a Roman general famed for his 'tactics of harassment and attrition rather than head-on battles' their aim is to take gradual steps towards 'socialism' rather than the outright revolutionary approach of others on the left. Of course references to socialism are a typical deception of the Fabians. A tradition that has been continued right up to the present day, that is to disguise their true meanings and intentions. Any mention of socialism was really a veiled reference to communism. Sydney Webb, one of the founders of the Fabians, along with his wife Beatrice even wrote a book called 'Soviet Communism: A New Civilsation'. It was denounced by many for its uncritical description of Stalin's harsh and murderous regime.

The original and still standing aim, was world communism. Yet another of the many fronts that have been opened in pursuit of a totalitarian New World Order.

Below is a video recorded in the garden of another of the early Fabians, George Bernard Shaw. He's the successful playwright who made the following quote:

"I also made it quite clear that socialism means equality of income or nothing, and that under socialism you would not be allowed to be poor. You would be forcibly fed, clothed, lodged, taught, and employed whether you like it or not. If it were discovered that you had not character enough to be worth all this trouble, you might possibly be executed in a kindly manner; but whilst you were permitted to live you would have to live well."

As you can see from his house and gardens 'equality of income' was for the masses, not for elites (or rather useful tools of the elites) such as Shaw. Shaw seemingly had a similar distorted view of 'socialism' as the multi-millionaire, multiple property owner and fellow Fabian, Tony Blair.

The video is far from professionally done. It's in the format of a casual interview with Robert Theobald and I found it quite interesting. I certainly learned a few things and if you know very little about the Fabians it serves as a good introduction. It also joins a few of the dots connecting the likes of Common Purpose, Agenda 21 and the Frankfurt School to the Fabian agenda.

Apologies for the lack of posts....

.... but I'm working on an article on what others have described as the 'second matrix' or the 'double cross. In the meantime here are a couple of videos that form part of the jigsaw I'm trying to piece together.

It was said in advance that child abuse victim Bill Maloney of Pie and Mash films was going to commit treason at the 'UK Rally Against Child Abuse' at Trafalgar square on Saturday August 7th. True to his word he did just that. He accused the Queen Mother of paedophilia and the Queen herself of covering it up. Interestingly he also stated that until a year ago the age of consent in the Vatican was only 12. Since a film of his called 'Sun, Sea and Satan' was released a year ago mentioning this it's since been raised to 14. As he says, priests are supposed to be celibate so why do they even need an age of consent?

The deeper you dig into the murky world of the elites who really control this world the more you realise that child abuse plays a significant role. Not least in the satanic rituals that are more common than any of us dare to realise.

We Need World Government Because Of Space Aliens

As Bill Cooper says in this short video most of us "have been ignoring the UFO phenomenon for too long. It has all the hallmarks of the most successful, most sophisticated, mind control operation in the history of the world and [we] are ignoring it."

The video came to mind the other day when the story that Winston Churchill 'ordered a cover-up of a Second World War encounter between a UFO and a RAF bomber [because he feared] a public "panic" and loss of faith in religion about the... incident'.

Is this yet another small step in the operation. A subtle seed planted into the consciousness of the masses in readiness for the great alien deception. Who knows? The PTB certainly want their world government whatever way they can get it and the existence of aliens as a reason for the world to 'unite' appears to be one of the possible tactics they can employ.