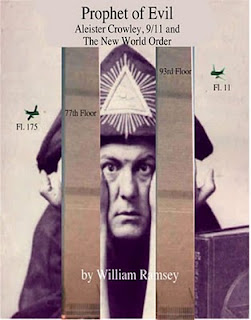 Yesterday evening I was listening to a radio interview with William Ramsey, author of the book, 'Prophet of Evil: Aleister Crowley, 9/11 and the New World Order'. He has also produced a video of the same name. The interview was about his book and film which looks at the connection, through Crowley, to the bringing down of the twin towers of the World Trade Centre on September 11th, 2001 and proposes that this was an occult ritual. Many of these connections are numerological and from what I've read of his work he certainly makes a convincing case.


Ramsey's central thesis is that during Aleister Crowley's life ands work there were four key numbers involved. These were 11, 77, 93 and 175. These numbers are essential to the occult, magical system devised by Aleister Crowley.


11 was important because, amongst other reasons, '11 is the number of magic itself'.


'77 ... represents half of the formulation of sexual magic in both the O.T.O. and the Kabbalah.  It is also the 77 infernal names of the Devil in The Satanic Bible by Anton LaVey.


The cabalistic gematria values of the Greek words Thelema (Will), Agape (Love) and, Aiwass[6] in Crowley's magical system equate to the number 93.


Liber 175 in Crowley's magical system is a ritual used to invoke any deity by adoration.

Possibly the primary number involved in the ritual was the number 11. The towers themselves were symbolic of the number 11, the date was, of course, the 11th and one of the planes was numbered flight 11.


Someone phoned in and asked Ramsey if there was a direct connection between Crowley and those behind the New World Order. He responded with several quotes that reflected their typically elitist thinking. Below is an example from the Book of the Law:


“The Book of the Law was given to mankind chiefly in order to provide it with an impeccable principal of practical politics… We should have no compunction in utilising the natural qualities of the bulk of mankind. We do not insist on trying to train sheep to hunt foxes or lecture on history; we look after their physical well being and enjoy their wool and mutton. In this way we shall have a contented class of slaves who will accept the conditions of existence as they really are, and enjoy life with the quiet wisdom of the cattle.”

In 'The Confessions of Aleister Crowley: an Autohagiography' he stated his belief that:


"… despite all its drawbacks, there was never a better social system than the feudal, so far as it derived from the patriarchal."


According to Ramsey, "he also stated that the government must lord over and manage hordes of ignorant masses".

Do The Elites Worship Lucifer?

I've had reason to refer to the elite worship or veneration of Lucifer several times in recent posts. I'm aware that this may seem a bit 'far out' for some if for no other reason than it did for me until I researched the subject. Here are a just a couple more reasons why I feel we need to face up to the fact that what we face is an occult Luciferian cabal intent on enslaving humanity.


Firstly, here is a section from an article on the Cutting Edge website entitled 'Symbols Prove Invisible Fraternity Of Freemasonry Is Satanic': 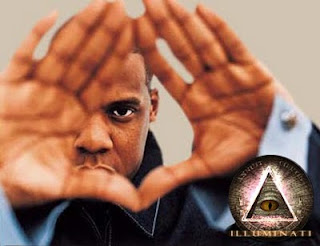 "The All-Seeing Eye was representative of the omniscience of Horus, the Sun God, [Magic Symbols, by Frederick Goodman, p. 103, Satanic symbols book]. As one Masonic book says, "These considerations lead us to an interesting topic, the Eye of Mind or the Eye of Horus ... and conveying the idea of the 'All seeing Eye'.  The end set before the Egyptian neophyte was illumination, that is to be 'brought to light'.  The Religion of Egypt was the Religion of the Light". [Thomas Milton Stewart, The Symbolism of the Gods of the Egyptians and the Light They Throw on Freemasonry, London, England, Baskerville Press, Ltd., 1927, p. 5]. This Masonic author has just told you that the Light to which Masons constantly refer, and toward which they are to constantly move, is the Religion of Horus!  This is damning, because in Egyptian Mythology, Horus IS Lucifer [Former Satanist, William Schnoebelen, Masonry:  Beyond The Light, p. 197]."


This is an important consideration. The 'All-Seeing Eye' of Horus is a widespread symbol used by occultists. Most famously it is on the rear of the American one dollar bill. and only recently we saw a representation of it in the floodlights of the new Olympic stadium in London. We can also see it in some Roman catholic churches but possibly the most prevalent of all though is the symbolic closing or hiding of one eye by celebrities in the media. It is doubtful that all of them are fully aware of what they are doing but the prevalence of this symbolism, particularly in magazines and the music industry, shows just how endemic this occultism is.


It's been a while since I've posted anything partly because I've been working on a rather long piece and partly due to other distractions and difficulties. Anyway I thought I'd take a look at this essay, 'The Global Coup d'Etat', by the late lamented Philip Jones. It was written in April 2009 which would have been not long before he passed away.

He starts off by describing the term the 'New World Order' as "the advent of a Totalitarian World Government" which is being pursued by "a powerful and secretive group known as the Illuminati…" I used to shy away from using the word 'Illuminati' because it seemed an almost cartoonish description too easily associated with the smear 'conspiracy theory'. I was aware that there was ample evidence that there was an agenda to create a world government and I thought that the use of the word 'Illuminati' may put some off some from looking at that evidence. I'm far more comfortable with using it now. I tend to see it as a useful term for those occultists at the higher levels of the secret society networks that are pulling the strings in the 'conspiracy'. William Guy Carr, in his manuscript, 'Satan, Prince of This World', places the Illuminati under the control of, what he describes as, the Synagogue of Satan. This in turn, he claims, is itself controlled by the High Priests of the Luciferian Creed. I'm not convinced that we will know the exact power structure of the controlling cabal until we have managed to defeat their attempt to create a world government. Until then I feel it's safe to say that there is an occult elite, operating through secret societies, particularly freemasonry and that this elite are both Satanic and Luciferian. In this respect the use of the descriptive term 'Illuminati' is as good as any.

“Marxism you say is the bitterest opponent of Capitalism, which is sacred to us. For the simple reason that they are opposite poles, they deliver over to us the two poles of the earth and permit us to be it's axis. Within these two opposites, we find ourselves identified in the Internationale. And these doctrines of the two poles of society, meet in their unity of purpose, the renewal of the world from above by the control of wealth, and from below by revolution”.