Thought Police Muscle Up In Britain. 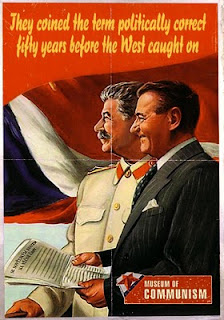 The article below was written by Hal G. P. Colebatch for The Australian on April 21st, 2010. It really doesn't require any comment from me whatsoever. The fact that it's the view of an Australian, looking at Britain from afar, gives it an extra poignancy. What has this country come to?


There are no concentration camps or gulags but there are thought police with unprecedented powers to dictate ways of thinking and sniff out heresy, and there can be harsh punishments for dissent.


Nikolai Bukharin claimed one of the Bolshevik Revolution's principal tasks was "to alter people's actual psychology". Britain is not Bolshevik, but a campaign to alter people's psychology and create a new Homo britannicus is under way without even a fig leaf of disguise.


The Government is pushing ahead with legislation that will criminalise politically incorrect jokes, with a maximum punishment of up to seven years' prison. The House of Lords tried to insert a free-speech amendment, but Justice Secretary Jack Straw knocked it out. It was Straw who previously called for a redefinition of Englishness and suggested the "global baggage of empire" was linked to soccer violence by "racist and xenophobic white males". He claimed the English "propensity for violence" was used to subjugate Ireland, Scotland and Wales, and that the English as a race were "potentially very aggressive".

In the past 10 years I have collected reports of many instances of draconian punishments, including the arrest and criminal prosecution of children, for thought-crimes and offences against political correctness.


Countryside Restoration Trust chairman and columnist Robin Page said at a rally against the Government's anti-hunting laws in Gloucestershire in 2002: "If you are a black vegetarian Muslim asylum-seeking one-legged lesbian lorry driver, I want the same rights as you." Page was arrested, and after four months he received a letter saying no charges would be pressed, but that: "If further evidence comes to our attention whereby your involvement is implicated, we will seek to initiate proceedings." It took him five years to clear his name.


Page was at least an adult. In September 2006, a 14-year-old schoolgirl, Codie Stott, asked a teacher if she could sit with another group to do a science project as all the girls with her spoke only Urdu. The teacher's first response, according to Stott, was to scream at her: "It's racist, you're going to get done by the police!" Upset and terrified, the schoolgirl went outside to calm down. The teacher called the police and a few days later, presumably after officialdom had thought the matter over, she was arrested and taken to a police station, where she was fingerprinted and photographed. According to her mother, she was placed in a bare cell for 3 1/2 hours. She was questioned on suspicion of committing a racial public order offence and then released without charge. The school was said to be investigating what further action to take, not against the teacher, but against Stott. Headmaster Anthony Edkins reportedly said: "An allegation of a serious nature was made concerning a racially motivated remark. We aim to ensure a caring and tolerant attitude towards pupils of all ethnic backgrounds and will not stand for racism in any form."


A 10-year-old child was arrested and brought before a judge, for having allegedly called an 11-year-old boya "Paki" and "bin Laden" during a playground argument at a primary school (the other boy had called him a skunk and a Teletubby). When it reached the court the case had cost taxpayers pound stg. 25,000. The accused was so distressed that he had stopped attending school. The judge, Jonathan Finestein, said: "Have we really got to the stage where we are prosecuting 10-year-old boys because of political correctness? There are major crimes out there and the police don't bother to prosecute. This is nonsense."


Finestein was fiercely attacked by teaching union leaders, as in those witch-hunt trials where any who spoke in defence of an accused or pointed to defects in the prosecution were immediately targeted as witches and candidates for burning.


Hate-crime police investigated Basil Brush, a puppet fox on children's television, who had made a joke about Gypsies. The BBC confessed that Brush had behaved inappropriately and assured police that the episode would be banned.


A bishop was warned by the police for not having done enough to "celebrate diversity", the enforcing of which is now apparently a police function. A Christian home for retired clergy and religious workers lost a grant because it would not reveal to official snoopers how many of the residents were homosexual. That they had never been asked was taken as evidence of homophobia.


Muslim parents who objected to young children being given books advocating same-sex marriage and adoption at one school last year had their wishes respected and the offending material withdrawn. This year, Muslim and Christian parents at another school objecting to the same material have not only had their objections ignored but have been threatened with prosecution if they withdraw their children.


There have been innumerable cases in recent months of people in schools, hospitals and other institutions losing their jobs because of various religious scruples, often, as in the East Germany of yore, not shouted fanatically from the rooftops but betrayed in private conversations and reported to authorities. The crime of one nurse was to offer to pray for a patient, who did not complain but merely mentioned the matter to another nurse. A primary school receptionist, Jennie Cain, whose five-year-old daughter was told off for talking about Jesus in class, faces the sack for seeking support from her church. A private email from her to other members of the church asking for prayers fell into the hands of school authorities.


Permissiveness as well as draconianism can be deployed to destroy socially accepted norms and values. The Royal Navy, for instance, has installed a satanist chapel in a warship to accommodate the proclivities of a satanist crew member. "What would Nelson have said?" is a British newspaper cliche about navy scandals, but in this case seems a legitimate question. Satanist paraphernalia is also supplied to prison inmates who need it.


This campaign seems to come from unelected or quasi-governmental bodies controlling various institutions, which are more or less unanswerable to electors, more than it does directly from the Government, although the Government helps drive it and condones it in a fudged and deniable manner.


Any one of these incidents might be dismissed as an aberration, but taken together - and I have only mentioned a tiny sample; more are reported almost every day - they add up to a pretty clear picture.
Posted by Harry J at 1:34 AM

I read this article a while back. It's hard hitting and straight to the point. It shows the truly deplorable slide into a fascist controlled, politically correct, minority promoting, majority despising society. However ask yourself a question and that is Why in Britain are people just happily allowing this control to be meted out upon them with out any resistance whatsoever? After all, the majority heavily outnumber the minority and I mean from white, anglo saxon, heterosexual, Christian denomination peoples. It's sadly an act of cowardice on their part. No one want to discuss it with friends/work colleagues through fear of being branded a racist. In other words they have no intention of protecting their culture and traditions and quite happy to see 3rd world inferior cultures and people take over. They shame their ancestors who died so they could be free.

Our society is the way it is because it's supposed to go that way. Sure our media's played a huge role in brainwashing and indoctrinating the public but, in all fairness, if our society wish to remain non critical thinking automatons, they deserve to lose everything their ancestors fought for them to have.

The people of the UK are weak. They are ignorant through their own choosing and many are unwilling to stand up for what's right and the undeniable truth for fear of (again) being branded by yet another liberal, debate ending slur word - racist, bigot, homophobe etc etc.

By the way you can catch me on my blog:

I've started writing again (I think) and you won't see me on the UK Column anymore, due to the fact that Mike banned me for calling a new poster a Liberal Left Loon. So much for freedom of speech on the UK column eh?

Alright Marcus. In recent discussions I've had with several people the thing that stood out for me the most was the extent to which they'd sucked all the propaganda (brainwashing) and how much they defended it when challenged. It really is quite unbelievable.

Sad to see you're no longer posting on the UK Column. Even though we don't agree on everything I saw you as an ally on many important issues.

I'll add your blog to my sidebar. Good luck with it.

Follow our signals right now and make up to 270% per day.