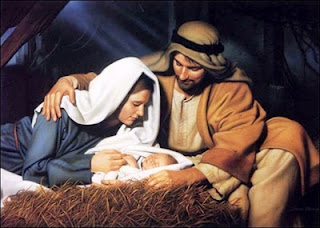 It would be very easy to do a piece on how December 25th wasn't really the birthday of Jesus and so contribute to the concerted effort to undermine and destroy Christianity. There's no mention of Jesus' birthday in the Bible and if shepherds were watching their flocks by night then it wouldn't have been in December.
It seems that the decision to celebrate the birth of Jesus on this date was made by the Roman Emperor Aurelian. He merged the pagan festivals of Saturnalia and Sol Invictus so as to ease the transition from the old pagan cults to the new Christian religion. It was just one of the many pagan imprints the Roman Church gave to the Christianity they had decided to use as their new control system. Those who criticise Christianity would do well to remember this and not confuse the Roman Catholic Church with true Christianity and the message of Jesus as contained in the Gospels.
Whatever else Jesus was he was certainly a rebel against the ancestors of those who are trying to impose their Satanic New World Order on us today. There seems only too many who are happy to see the evident wrongs of the Orthodox (Catholic and most Protestant) Churches and use them to castigate Christianity. Well known 'Christians' such as the Royal Family, the Blairs, the Bushes and Gordon Brown all contribute to giving the Christian faith a bad name.
I almost fell for the propaganda of Zeitgeist, David Icke and others who eagerly tell you that Jesus didn't exist as they seek to impose their Theosophic New Age belief system. I have many misgivings about the prophecies in Revelation. Too many to explain in detail. I've no idea if Jesus is going to come back. I can only hope he does because we need all the help we can get at the moment. For we, I mean those of us on the receiving end of the fascist New World Order agenda to subjugate and enslave. Make no mistake, this is truly a battle between good and evil.
So, because we don't know the correct birthday of Jesus, we may as well continue to celebrate his birth on December 25th. Forget the dreary sun gods of the occultists and spare a thought for the one that kicked the money lenders out of the temple. I hope and pray that he can help us in any way he can to do the same to their modern day descendants.
Happy Birthday Jesus.
On a lighter note I give you the most overplayed, but still the best, Christmas song ever from my fellow Wulfrunians Slade. Thanks to all who have read and commented on the blog over the last year. Let's all redouble our efforts in the coming one.
See you in 2011,
Harry.
Posted by Harry J at 11:23 PM

Thanks Anon but I'll give Benjamin Fulford and his various dragon societies a pass.

Thanks Anon. I watched the video and it sounded exactly like the real 'Illuminati' end times agenda. I could explain why I think so, but I've got a bit of a cold and I just can't summon the energy at the moment.

Thanks Anon. I'm not sure I believe him. New Earth/New Age/New World, they're all part of the same agenda I suspect.

Christ was born at the Feast of Tabernacles.

"Those who criticise Christianity would do well to remember this and not confuse the Roman Catholic Church with true Christianity and the message of Jesus as contained in the Gospels."

There's a splendid video of the great American architect Frank Lloyd Wright in which he is asked:

What do you think of organized Christianity?

To which he replies in the tones of a charismatic Welsh preacher:

Did the Master of it say 'organize it'?

Did he not say 'wherever a few are gathered together in my name,

there is my church.'"

And just as much of official church teaching may have little to do with the Christian message, so also the Bible.

Desmond Tutu was once asked about some apparent contradiction in the Bible, to which he responded in that fine and resonant voice:

"Whatever is not in the Spirit of Christ, I reject.

I reject it absolutely."

Which I think puts the reality of Christianity very clearly. It is the "small still voice" of conscience that matters, and is so difficult to obey.

All true CS and something I've slowly come to realise in the last year or so.

Sorry i am over a year late but well said, we may as well celerbrate Our Saviours birth on Dec 25th indeed if not only to quell the Pagan, secular and commercial influence if nothing else. Harry, one of the best books to read i feel to understand Revelations is "The Revelation of Jesus Christ" by John Metcalfe. Some of those end-time sites can be misleading. Jesus is the way and the truth and is glorified in Revelations and we all know how it ends. :)
Andrew christiansojourner

I've read quite a bit on prophecy recently and there is obviously a great deal of disagreement on the subject. Much of it, I suspect, intentional. I tend to favour the 'historical' interpretation although the 'futurist' appears to be more popular. I'd be interested in reading his book given the chance.

I believe its both historical and futurist in accord with the Resumptive interpretation, backward and forward in time from ascension to judgement seven times over from different standpoints. Higly reco the book Harry, a 600 page hardback for just a few quid second hand on amazon last time i looked.
In Christ
Andrew

hi,are you sure this jesus christ geezer existed...i think its false hope...you see the word 'save' or saviour to me goes with the word 'AVE'..A DEMON contacted by john dee the royal astrologer..the banks want us to save,save,save...JESUS CHRIST has 11 letters 5and 6 an initiation of the golden dawn..so dont fall for the jesus scam..you dont need these ficticious prophets

and just to add..first words of the bible i think are... I AM THE WORD AND THE WORD IS GOD...and so the mind programming begins

and another thing the word christ isnt that far away from chronos...the word church in numerology has 11-11 at start and finish..the church spires in the UK have 11-11 symbolism..wouldnt go amiss at a black sabbath rock festival with all the 11 finger signs..lets face it the templars ordered the building of the churches formed in 1118AD ,SIMILAR time to when the BRITISH CROWN WAS FORMED 1111AD

"hi,are you sure this jesus christ geezer existed…"

Yes and the evidence is conclusive. With respect, rather more so than your convoluted attempt at numerology. You should try and search it out and see for yourself.

"...and so the mind programming begins"

Well, ok, in what way do you think the Bible programmes us?

"Yes, and the evidence is conclusive"

Great blog. Are you still as sure of this statement today?