Terror On The Tube (When Reason Sleeps Monsters Are Born) 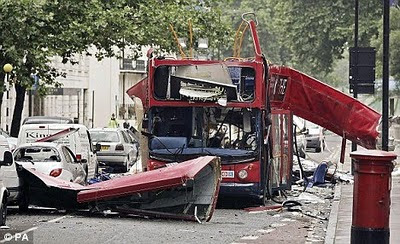 There has been a tremendous focus on the events of 9/11 in New York and a resulting mass of evidence that points to the involvement of at least some parts of the American government itself. At the very least the idea that it was solely down to Osama Bin Laden and 'Al Qeada' has been provably demolished.


There has been much less of a focus on the London tube and bus bombings on 7/7. Even though the evidence that all is not what it seems is not quite as substantial as that of 9/11 it is there all the same. Nick Kollerstrom has written a book about it called 'Terror On The Tube' which looks into the events of that day in some detail and leaves us in no doubt that the government's story does not hold true.


He has a website that accompanies the book that has many articles of interest. The one that caught my eye was written by philosopher Dr Rory Ridley-Duff of Sheffield Hallam University. It compares the likely veracity of two differing accounts of that day. The one was the BBC's program, which was part of its 'Conspiracy Files' series and the other the much lauded '7/7 Ripple Effect' that blew away the government's story and left the viewer with no doubts that some element of the British power structure was involved.


On the BBC's efforts he writes:


“It is the BBC / Government theory that has a lower level of correspondence with known ‘facts’, is incoherent to the point of being implausible, and is more likely to distort its reports because of institutional controls and political pressures.”


And on 7/7 Ripple Efffect he states:


“The thesis put forward in 7/7 Ripple Effect remains coherent with available evidence. A social constructivist (critical) perspective identifies cultural and political interests that influence the selection and interpretation of available evidence. While the paper concludes that both documentaries construct truth that supports their political outlook and agenda, the theory advanced in 7/7 Ripple Effect is better able to explain anomalies in the official account as well as the evidence of a crisis at Canary Wharf on the same day.”


In summary he adds:


… for ethnic British people in particular, the notion that the British government (or one of its security agencies) would bomb its own citizens to bolster support for war may trigger a great deal of cognitive dissonance (Festinger, 1957)… As a government bombing its own citizens violates the principles of liberal democracy (government by the people, for the people), there is a ‘common-sense’ impulse to discard any theory based on the idea.


The 'impulse' passed away for me a long time ago now. Is it worth clamouring for another 'investigation'? They appear to control all the levers of power so it seems futile to do so. The conclusion I have reached after investigating this and many other subjects is that our only recourse is some sort of Lawful Rebellion. As Nick Kollerstrom quotes on his blog 'when reason sleeps, monsters are born'. I can only hope that enough to make a difference begin to wake up.
Posted by Harry J at 10:46 PM

I watched the Ripple Effect. It was a very interesting and thought provoking documentary and pretty much blew apart the official story. I always knew that there was something seriously wrong with 7/7 and this was long before I started watching "conspiracy" videos and reading literature regarding it. It is the type of investigation that Muad'Dib did in his documentary that the BBC journalists should be doing but considering that they're the propaganda wing of the government and thus, the EU and NWO, then they will continue to deny any "foul play" was involved in 7/7/05

The whole thing stinks. There is no point in an investigation as it would simply be another whitewash and of course more public money going into the pockets of solicitors who knew the outcome long before they started.

7/7 along with 9/11 will go down in history as Islamic terrorists attacks. People really do believe that sh*t. People are unable to think critically and hence why our society are nothing more than sheeple unfortunately.

When I first started this blog the main intent was to collate information I could then point friends and acquaintances towards. There are a couple who've made the effort and who now understand, at least, that things aren't quite what they seem. The rest remain resolutely uninterested despite my pleading. Sheeple indeed.

Kollerstrom’s very impressive. He’s come out as contrarian on aspects of the holocaust and 7/7, and I think lost his job as a result, but still appears committed to the truth regardless of political and personal pressures. Most academics do not think to challenge orthodoxy, and those that dare usually fold at the first raised eyebrow.

The Lawful Rebellion / Sovereignty stuff is certainly beginning to look more credible, if only as a spanner in the works. I think of law ultimately as expressed government power, often quite arbitrarily, so I don’t put much faith in words on any document, but as a vehicle for expressing our power and directing it at the empire’s vulnerable positions LR has a lot going for it. Your last post on the subject, about the plan to establish ‘self-sufficient communities’ and alternative banking and justice systems, was very interesting, I think I’ll have to hook up with my local BCG chapter and stay more informed about these developments.

I did notice somewhere that somebody had dismissed what Kollerstrom had to say about 7/7 because he was a 'holocaust denier'. I've no idea what his position on it is, I'll have to investigate. I know that at the very least we've been lied to about the holocaust but it's such a touchy subject I've shied away from looking into it too much.

Like you say Lawful Rebellion is at least a 'spanner in the works' but you never know it may well develop into a bit more than that.

On Bonus Bitcoin you may recieve free satoshis. Up to 5,000 satoshis every 15 minutes.

Did you consider exchanging with the #1 Bitcoin exchange company - YoBit.

Have you ever consider automating your free satoshi collections by utilizing a BITCOIN FAUCET ROTATOR?